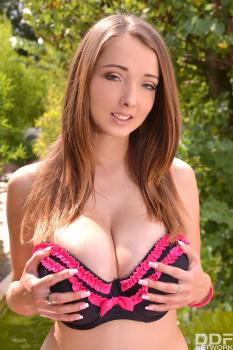 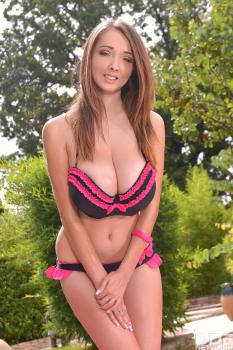 Description:
Lucie Wilde is known for her voracious appetite. In todays episode of DDF Networks Busty series the voluptuous babe deep throats Argos hard rod before enjoying him titty fucking her While relaxing in the sun the brunette babe with massive natural tits gets so horny and gives the pool boy some seductive looks with her green eyes. The Czech bombshell knows how to play with her talents and seduces the young stud to some lustful moments together. He cant resist that absolutely stunning beauty and grabs her 32F 70H knockers for a titty massage. The bikini girl takes off her top and lets him cram that cleavage with his boner. She enjoys sucking his cock and swallows his rod all the way down her deep throat He cant believe his eyes and enjoys her silken skin on his body before licking her shaved tight cunny. The moment he is done eating that tasty pussy he stuffs her fuckhole with his boner and bangs that college girl spoon style After another nipple play he finally blows his jizz all over her big tits
Model:
Lucie Wilde
Studio:
DDFBusty.com
Info:
File Name : 80006d1_2160_15600_Choky Ice and Aida Swinger_Spring Break - Neighbor Bangs Voluptuous Babes Big Tits.mp4
File Size : 2404.99 MB
Resolution : 3840x2160
Duration : 00:21:07
Video : AVC, 15.6 Mb/s, 29.970 (30000/1001) FPS
Audio : AAC, 317 kb/s (VBR), 48.0 kHz, 2 channels, 1 stream